How Does a Posek Come up with His Pesak? 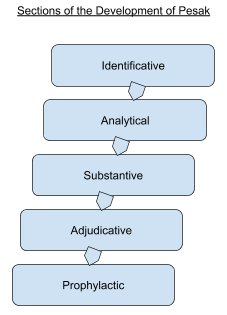 Rav Hershel Schachter (Daas Torah, min 15-20) said that a posek needs to be knowledgeable of the halacha, Yarei Shanayim, humble, honest, have commonsense to know how the halacha applies to each individual, have patience to listen to the details and complexity of the cases, and be on same wave length as the questioner.

Based on Precedent or Intellect