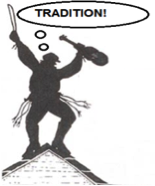 Before offering practical applications, let us inquire whether each approach can accomodate the idea of personal as well as communal practices. If we suppose that minhagim are based on not abrogating communal customs, then seemingly personal practices would not be binding. However, if minhagim are based on vows, they certainly would apply to individuals; but would it also apply to a congregation? Rav Hershel Schachter in an article on yutorah.org explains that there is the concept of a communal vow and applies to everyone in the community. Furthermore, the communal vow is binding not only to the original community who accepted the practice but also to future generations. A proof for this concept is the Gemara Ketubot 111a, which states that the Jews took upon themselves three vows and theoretically they are binding upon Jews to this day.[5] The concept could be explained by a similar concept we find regarding Korbanot. The Jewish community is considered a single unit that doesn't die because each successive generation fills the shoes of the previous one. Therefore, the Gemara Temurah 15b establishes that even though usually a person can not have a korban chatat brought on his behalf after he passes away, a congregation can do so because in reality the congregation lives on through their descendants.

Davening in a Minyan that Has a Different Minhag