Tzitzit or tzitzis (Hebrew: ציצית) are "fringes" or "tassels" worn by observant Jews on the corners of four-cornered garments, including the tallit (prayer shawl) and tallit katan. Since they are considered by Orthodox tradition to be a time-bound commandment, they are worn only by men 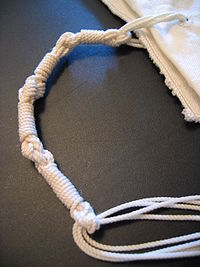 The tzitzit of one corner of a tallit