Difference between revisions of "Waiting between Meat and Milk" 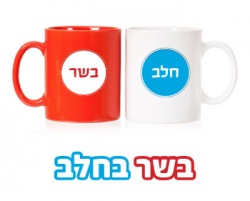 If One Already Made a Bracha

Waiting Between Milk and Meat