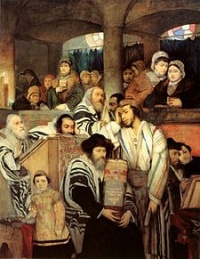 The Beginning of Yom Kippur

Neilah is the concluding prayer of public fast days, which, in modern times, is only recited on Yom Kippur. It consists of Ashrei, a silent Amidah, a Chazzarat HaShatz, and various selichot and addenda depending on the community. Birkat Kohanim is recited during the repetition of the Amidah.

The Conclusion of Yom Kippur